Red-veined Darters
Perhaps the last throw of the dice for this year on the forecast
Mark Nightingale and Pete Kinsella had up to 5 males 1500-1600 - unusual so late in the day - wonder how many there were earlier?

Unfortunately it has been all very vague re-females this year with just the one seen ovipositing and only two other sightings, one on the same day as the ovipositing.  If any of the photographers out there have any info on females and ovipositing, please could you let us know.  Thanks.

Despite the seeming unlikelihood of them magically finding this place during influxes, the general consensus is that this year's early and mature male dominated influx (just one 'teneral' reported) is part of a national migratory invasion.  Feedback suggests there are still a lot of people who look for perched insects rather than scanning the rippled areas of the waterbody (in preference to calm bits) during light winds, often far from the shore, as the most likely means of making contact (especially with mature migrants?).  Therefore I suspect that many in such (perhaps transitory) mode have been missed on Lancashire's waterbodies

Outfalls/Red Nab
The outfalls held a new Med - below on Red Nab and easier to find than yesterdays 3CY!  Also the first (dispersing) baby Black-headed Gull of the year - early?  Late afternoon saw two adults at low tide.  Its starting to happen! 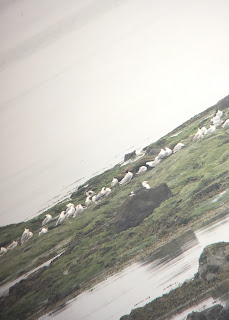