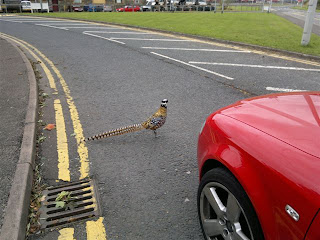 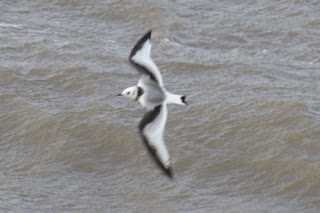 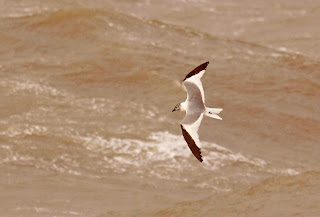 A selection of todays megas plus the long-range confusion species.  Thanks to Nathan Bray for the Reeve's Pheasant, Pete Cook for the Kittiwake and Dave Talbot for the Sabine's Gull

Heysham Obs
Could have done with being a bit cooler today with some proper shower-peppered polar air.  There was virtually nothing happening on the sea - the coverage was pretty thorough and produced nothing more than what could be expected on a random 'breezy day'.  However, the gale pleased the Sabine's Gull targeters, especially the photographers!  Thanks to all the seawatchers for records - I took one look at it after the morning Bonxie bonus and didnt rate the rather uniform high cloud which unfortunately prevailed for the whole day without a drop of rain.  Better tomorrow, certainly sound as though it will be (High Tatham 2100hrs)?

Outfalls (any advance on these, particularly terns, please let me know)
Sabine's Gull - from 0925ish on and off (first seen off north wall at 0915)
Arctic Tern - 7 juv, two ad
Sandwich Tern - 4
Common Tern - one juv
Little Gull - ad & 2CY
Med Gull - fewer around today in the rough seas with in total:  2CY, 4 juv, 2 adult seen at various times and (another?) 2CY on the Middleton model boat pond.  Incidentally one of the juvs around recently has an unread red darvic on the left leg but not the best conditions for reading rings!

North harbour wall
**Apparently one observer claimed a Sabine's Gull along the north harbour wall at the same time the adult was on the outfalls during early afternoon.  Second-hand info, but note the Walney sighting at 1340. Any more info on this, please?
Bonxie - one flew into the bay about 0730  and possibly the same (but see Walney posting) came out again about 1000ish
(and a brown thing glimpsed at long range heading out at c0740 was probably an imm skua spp)
Manx Shearwater - 1
Pink-footed Goose - flock of 43 south (first of autumn)
Greylag Goose - flock of 32
Gannet - 6
Kittiwake - c12 (no boats today)
Pintail - 20
Wigeon - 6
Goldeneye - adult male and female/imm together - a most unexpected sighting for this early in the autumn
Common Scoter - 1+4
Common Sandpiper - still present by the harbour mouth

Landbirds
Wheatear - at least 5 around the coast

Moths
Amazingly there were some of three species:  Flounced Rustic, Square Spot Rustic and Setaceous Hebrew Character - a scintillating trio.
Posted by Pete Marsh at 08:59 No comments: