A distant small gull on the outer outfalls initially though to be Little was seen this morning, then re-identified as a 'small black-headed gull' but no sign of a candidate at lunchtime when I got there and no decent view of eg bill or underwings (now winter ad Little there same time). 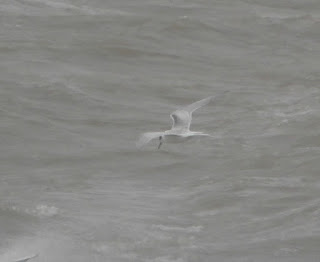 Taken through the spray and rain - thanks Malcolm
Common Tern - at least one juv remaining on the outfalls late afternoon Sandwich tern - ad out quickly
Kittiwake - ad out quickly - all three of the birds in transit thought to be associated with IOM ferry arrival a few minutes beforehand, then ad on outfalls very briefly late afternoon
Med Gull - At least 12 adult, 2 2CY, 6 juv
Shag - summering 2CY on wooden jetty
Bonxie (Great Skua) - one in about 1530
Manx Shearwater - gang of three in in short period of decent visibility