A piece of carelessness on my part not carefully checking what was a spike in the numbers of Eider at low tide but was distracted by an Osprey and an incoming phone call!  Thanks to Nick for picking out the Velvet Scoter on the dropping tide

Osprey - one flew up a central channel at c0930, hovering briefly over the centre of the channel before progressing north.  Cant understand why these innocuous fish-botherers cause so much mayhem - everything was up in the air, including large gulls and Oystercatchers, unless a Peregrine was targeting the high swirling Knot flock at the same time
Guillemot - the only auk seen today was a non-breeding plumaged Guillemot on both the incoming and dropping tide
Velvet Scoter - drake relocated on the dropping tide late afternoon - definitely been absent recently
Eider - at least 290 with an "additional" raft at low tide c/p the last week or so
Swallow - one north Middleton (IOY)
Coot - now 3
Gadwall - 7
Tufted Duck - 2 pairs
Teal - 3 pairs
Lots of Pheasant Middleton!
Chiffchaff - 5+ singing male Middleton
Wheatear - 2
Brent - 13 pale bellied today ( or strictly speaking 12 pale bellied together at low tide and one thought to be pale bellied joining them on the incoming tide 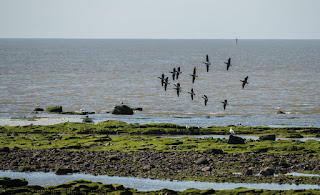