Thundering in the 'ears

A very heavy early morning thunderstorm. Rain pretty much all day alternating between heavy and quite heavy! The wind had shifted to SSE.
First, Howard had a look on the skear at low water yesterday afternoon and took these crisp shots (only really crisp when opened) 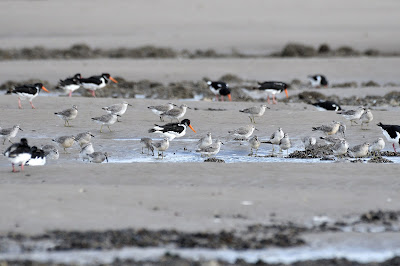 The only stuff I have from today are my morning checks (MD).
South shore at high water this morning 09:00
Mediterranean gull - at least 6 adult/3rd calendar year plus 2 2nd calendar year. One benefit of an easterly wind is that the gulls on Red Nab face you, making identification a bit easier.
Wigeon 39, numbers growing quickly
White Wagtail 1 male near the lighthouse (during a particularly heavy squall)
Rock Pipit 4 on Red Nab
Wheatear 6 on Red Nab and foreshore, this is a high number for this time of year, presumably grounded by the thunderstorm.
Middleton Nature Reserve
Just a five minute check on the way home.
The Mute family are back on the main pond
Gadwall 18
Mallard 2 male, seemed to have attached themselves to a female Gadwall each.
Posted by Pete Marsh at 20:47 No comments: