A spot of rock climbing

The wind was still from the south but quite gentle today. Some sunshine and light showers.
Meadow Pipit 1 on the foreshore rocks near Red Nab
Rock Pipit 3 at least, on the same rocks, one was torn between chasing off the Meadow Pipit and displaying.
This one is "striking a pose", I don't know if it the male displaying or a female responding (MD)
Kevin managed another Stonechat near the harbour Lighthouse
This report from Jeff Butcher (curtesy of the LDBWS website)

My first visit to Heysham this year. Knowlys Road at 09.40 there were at least 17 pale-bellied Brent geese and at least 59 eider.

Heysham skeer - low water 12:30
I say low water, but the tide doesn't go out far on these low 6.7m tides, just a small section of the inner skeer exposed.
Pale-bellied Brent goose 7 - this is what today's title refers to. I wasn't really expecting any here today, as I knew there is virtually no weed to feed on. But, as ever, the birds know better than me (MD). The only remaining weed was attached to the rocks and they were climbing on top to feed on it.
Not just an isolated incident, they were all at it. 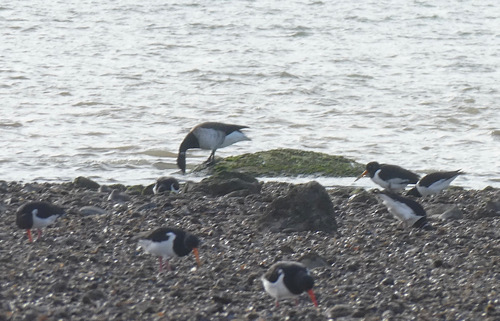 Eider - I didn't try to count, most were out of range, but there were some small groups of unattached males trying to woo the few unattached females.
Looks like the males we're trying to establish a pecking order