The light winds started SE before swinging through south and ending up WSW by evening. The morning sun eventually gave way to light rain in the afternoon.

Seawatch report from Pete:
Sea Heysham:
Adult summer plumage Little Gull
Adult light morph Pomarine Skua - picked out flying out (having floated in unseen on the sea?) just beyond the buoys then went further out before turning and gaining height whence flew towards the wooden jetty when I lost it behind fences.  At 0920, Dave Hawkins, who missed it high in the sky due to communication problems, picked it up flying low past him roughly down the shipping lane.  Didn’t fly back in again by 1100hrs. Presumably after the initial sighting, dropped down on the sea Lune deeps area and carried back in by the incoming tide
3 Arctic Skua
51 in Arctic Tern in 6 flocks
c35 Sandwich Tern
Guillemot
Kittiwake 2cy
12 Gannet
24 Common Scoter
8  Whimbrel.
Hard work with a lot of birds flying high and fixed Half horizon wide angled scope not covering the flight zone.  Rewarded though!
Also:
126 Eider
4 Great Crested Grebe (one flew in north wall, 3 in channel)
10 Red-breasted Merganser (3 flew in north wall, 7 on channel)
6 Canada goose
c60 Swallow
2 Redpoll in
Middleton Nature Reserve
Ringing report from Alan:On my arrival at 05.30 I was a little surprised to find a sharp grass frost although this quickly cleared. The sky was very clear and a SE breeze got up by about 09.30 although the promised cloud cover did not really materialise. The catch was modest and comprised
7 Willow Warblers
3 Lesser Redpoll
and singles of Robin, Common Whitethroat, Long tailed Tit, Great Tit and Reed Bunting.

There are plenty of warblers apparently on territory now. Only three Swallows were seen moving northwards. Two Kestrels were hunting over the reserve.

Janet took these shots of some of the Swallow moving through Middleton Nature Reserve. 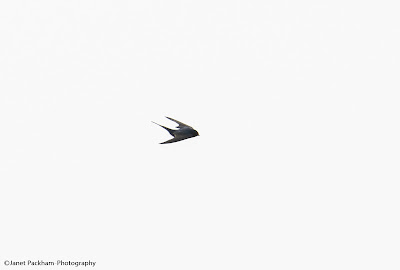 This shot of a Lesser Black-backed gull was taken by Kevin Eaves yesterday, on the Near Naze.
Posted by Pete Marsh at 20:51 No comments: