Quite fresh SW to W winds, sunny spells and showers all day.
A quick check around Ocean Edge shore found nothing! No wheatears, pipits or Linnet.
Brambling 3 briefly near pond behind Red Nab.
Middleton Nature Reserve - mid afternoon
There were plenty of ducks on the "no swimming" pond. 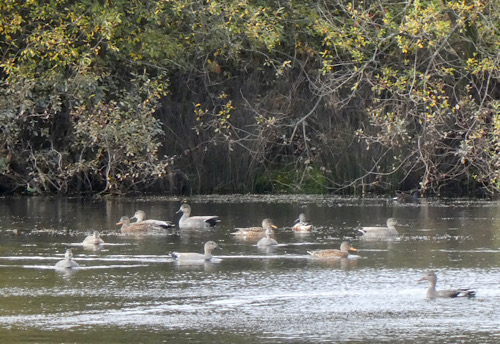 Including:
Gadwall 21
Mallard 2
Shoveller 2
When the second Shoveller joined the male, there was a series of mutual bobs and nods, that suggested they were a reunited pair.
The single cygnet has been chased off the main pond and is now trying to feed on the no swimming pond. But the aggressive male won't tolerate it.
Water Rail 1 calling
Common Snipe 1
Pheasant 3
No sign of Cetti's warbler today, but one Chiffchaff calling
Whooper Swan c15 flew low over the golf course and continued SE 15:05
Buzzard 1 low to south, probably local.
Insects:
No butterflies seen
Migrant Hawker 1 male
Common Darter 3 (2 male). All three had damaged and/or frayed wings.
Posted by Pete Marsh at 20:24 No comments: