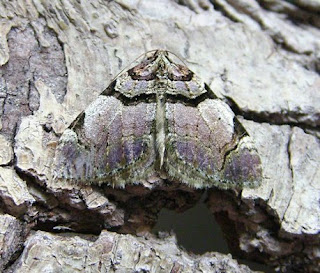 Today's Streamer - thanks Reuben
Heysham Obs
Not a lot happening other than a group of 3 Arctic Skua.

Moths & butterfly
Streamer was a good record - the first since 2004 & only about 4 in total.  Pebble Prominent was also new for the year.  A Peacock butterfly was seen heading NE along the north harbour wall - this is probably a new 10km square record (SD36)!

Wheatears
A lot of postings about 'Greenland' Wheatears on various sites over the last week or so.  The reason they havn't been mentioned here is that there have only been two candidates out of what has been a  rather late passage of (especially female) Wheatears.  We had about 30 Wheatears during survey work on moorland on western Northumbria yesterday and these were 'British-sized' birds still in 'loose flock', but (with one exception) not territorial mode.  Maybe some of these are Scandinavian birds, or even still Scottish or northern English birds?

Elsewhere
Secondhand, but evidently reliable, report of 15 Dotterel on Ward's Stone on 23rd April - report from keeper that they have been around since 15th April
Posted by Pete Marsh at 11:23 No comments: