Heysham Obs
A second-hand report of as many as five male RVD flying in very marginal weather early afternoon as seen by two dragonfly enthusiast on holiday up here.  Thanks for this.  One seen briefly at about 1530hrs - very late for this species still to be flying over the water

Six -spot Burnet out on Middleton (all reports so far have been the typically slightly earlier Narrow-bordered five-spot).  Thanks Janet 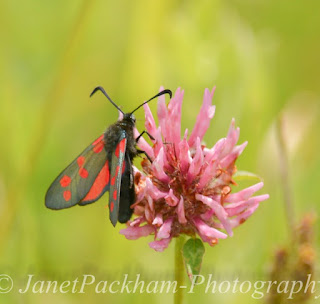