Middleton CES and a Raven mystery

Heysham Obs
Sanity was questioned this morning as I drove through the Lune valley at some ridiculous hour with rain showers and a gusty wind.  Blind faith in the forecasted weather window for the Middleton CES and already the wind speed was way out.  The net-setting was a bit tricky but as soon as the CES period started the weather changed for the better - indeed it was too sunny!  With the assistance of John Mason and no heavy shower clouds on the horizon, we were able to set two supplementary nets, mainly to try and assess the Grasshopper Warbler situation.  The following observations were made:

Middleton NR 0545-1045hrs
Raven - Four flew very high from the west - seemingly from over the Bay and headed due east until lost from sight.  An odd record for this time of year but they breed early and disperse early?
Siskin - five lots of calls heard - all appeared to be single birds heading south/south-east
Swift - 7 south
Reed Warbler - there appears from ringing data and other singing birds to be about 6-7 territories
Sedge Warbler - Four separate independent 'old' juveniles were caught along with one unringed adult and one adult retrap which did at least have a brood patch.  This was thought to be associated with just the one obvious territorial male, the only one heard singing or calling
Grasshopper Warbler - With the assistance of a caveat on my ringing permit allowing brief playback for this species at Middleton, two retrap adults, one unringed adult and two juveniles were caught.  Much better than expected after the recent weather and obvious demise of the much larger Sedge Warbler population.  The playback, of course, was only used by the two supplementary nets, not within the CES envelope.
Gadwall - male seen once in flight
Curlew - three separately high to the east

Ringing at Middleton NR
Better than expected with quite a few tits and Willow Warblers keeping the session going in the absence of any significant numbers of other warblers, especially Sedge.  41 new and 12 retraps were caught with almost half the newly-ringed total being Blue Tit and Willow Warbler

Moths
A very early Toadflax Pug was left for me to look at by John Girdley (thanks John) - no, not a misidentified Foxglove Pug - this is a known site for Toadflax and we do know what they look like!  Common Emerald best of the rest 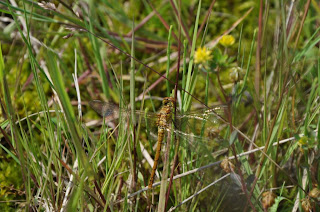 .First Common Darter of the year and there are still no known Emperor records.  Thanks Janet
Posted by Pete Marsh at 13:11 No comments: