Geese on the move 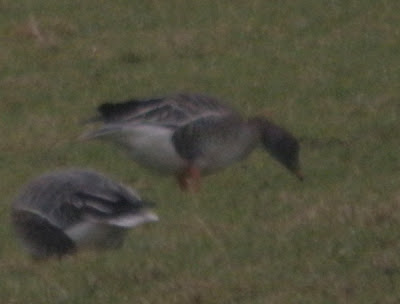 Pink-footed Goose
Migratory flocks of 86 at 1125hrs, 136 at 1415hrs & 102 at 1420hrs - all heading high to the north-west in a very limited period of observation - so many could have been missed. Heading off ahead of the weather front was probably part of the strategy, but this is the usual time of year for major movements

Ringing by the office
Highlighted by an unringed Wren - very unusual at this time of year. Otherwise the same Long-tailed Tits as the previous post-freeze ringing sessions and a couple of new Chaffinch and Greenfinch along with an ?eight-year old Blue Tit.

Elsewhere
Tundra Bean Goose along Heysham bypass. Negative on Smew on Freeman's Pool. Ad Greenland White-fronted Goose with Greylags (& the Snows) by the Eric Morecambe Pool.
Posted by Pete Marsh at 15:09 No comments: