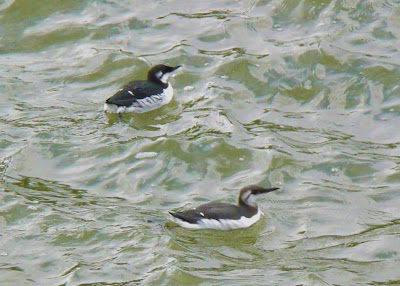 Heysham Obs
Rather atypical at this time of year, as opposed to late winter/spring passage, was a significant number of Kittiwake, plus a few half-decent bits and bobs

North wall 0900-0945, 1015-1130
Great Northern Diver - one out c1050hrs
Kittiwake - flock of 63 lifted off the sea, swirled around, landed on sea & floated into the bay. 215 'out' during the morning. Flock of 18 'in' during pm, then 55 'in' behind a freight ferry. Just like the old days!
Arctic/Pomarine Skua - very dark juvenile at 1030 which was chasing Kittiwakes and appeared on size & jizz to be more likely an Arctic but too distant to be sure (Jean & Dan). Landed on the sea/disappeared low behind troughs. Definitely not the Bonxie.
Razorbill - 5 out
Pintail - flocks of 10+18 out
Red-throated Diver - 1 out & one sp, prob this, out
Shelduck - 29 out (4 flocks)
Med Gull - two adults around, one Czech-ringed
Guillemot - two in harbour, one out
Bonxie - one very distant, but definitely this species of skua, 'in' at 0920hrs
Twite - 26 with 16 unringed
Wooden jetty: Definitely no Shag & no sign of any Purple Sandpiper or indeed Turnstone!