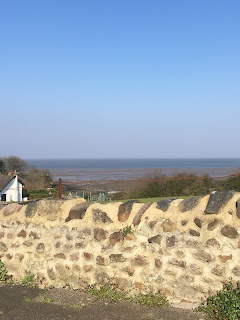 Knowlys road lower VP - a great site for scanning the low tide channels the easy way (in combination with Knowlys upper for the 'Brent skeers area' and the north harbour wall for the outer sections) and also seeing into wave troughs during howling gales.  Wish we'd used it in previous years.  The green post 'marker' is on the mudflats behind the brown post on left hand side of pic

Coastal sightings
Meadow Pipit - 71 NE, a large chunk of these in one gang of 36
Knot - c6500 on skeer off play area, twice as many as yesterday
Eider - 455 but some hiding behind skeers
Great-crested Grebe - 21 - many displaying pairs
Red-throated Diver - the same one as the other day off the heliport with orange object attached to the left wing - close inshore by green post
Shag - 3CY same area as RTD
Red-breasted Merganser - 7
Arctic Skua - dm adult in 0733 - quite leisurely up the Kent channel with no height gain observed - prob same bird as seen earlier off Rossall, having sat on the sea for a bit (IOY)
Little Gull - two adult together (and possibly another one far offshore as seen from OE) heading in along with trickle of Common and Black-headed Gulls
Sandwich Tern - just two together heading in
alba Wagtail - 5 NE
Linnet - 16 NE
Swallow - 1 NE
Sand Martin - 3 NE
No Brent again
Purple Sandpiper - one roosting with Turnstone on wooden jetty.

Moth trap
Nothing last night and just one moth found by Laura the previous night......but a good one: 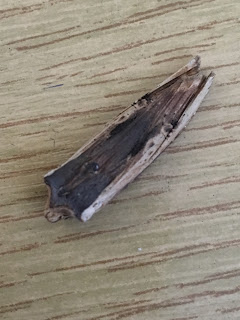