Large and varied insect influx into the east wind.

East to ENE winds all day, high cloud with plenty of sunshine

North shoreline low water 09:45 (MD)
No Terns seen this morning
Swallow 8 - all singles apart from 1 group of 3
Bumblebees at least 6 in off, but no other insects noticed.
There are always at leat 4 Eider around here, this male provided som nice in flight shots. 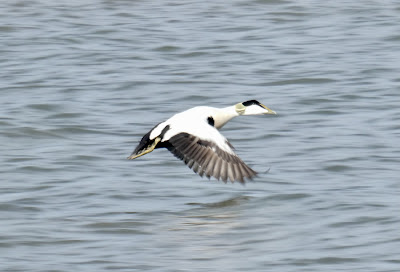 Middleton Nature Reserve
Janet, Tim and Kevin Singleton had a look at different times today, all reported plenty of butterflies, these are likely to be "home grown" and not related to the influx in today's title.
Cetti's Warbler 3
Several each: Willow Warbler, Chiffchaff and Blackcap
Greylag Goose 2 - flew off towards Middleton while Janet was there but returned when Tim was watching.
Shelduck 2
Little grebe on main and "no swimming" ponds
Butterflies included:
Orange Tip
Speckled Wood
Brimstone
Holly Blue
Peacock
Small Tortoiseshell
South wall - this is where the main insect invasion was apparent.
Report from Kevin Eaves
Swarms of insects on the south wall this afternoon. Mainly beetles of quite a few species.
The following pictures are just a few of the huge number and variety of beetles along the south wall today. I even managed to swallow one and get one inside my t-shirt! I've never seen anything quite like it. Alison identified those that she could. Like micro moths, some have to be dissected for a positive identification.


Quite a haul!
North wall (MD)
Just a quick evening check
The large bumblebees were still coming in off - 3 seen
Swallow 2 singles
Whimbrel 1
Sandwich Tern 2 fishing - both can be seen diving on this clip
They didn't appear to be catching anything, but on closer inspection they were catching quite small fish, probably Common Gobies which are common here. In this shot you can just make out a small fish at the base of the bill. 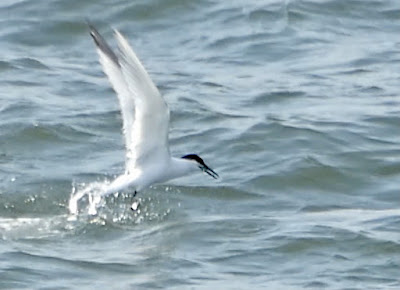 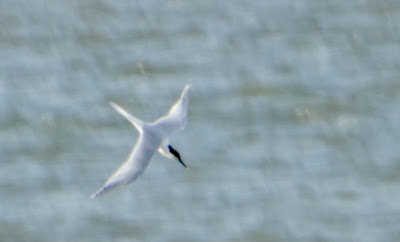 After a few such dives they both had clearly caught enough and landed on the mud to preen.
Posted by Pete Marsh at 20:55 No comments: