It was almost breathless early on with very low cloud cover. Later the east breeze cleared the cloud and the sun shone for most of the afternoon.
Middleton Nature Reserve
Ringing captures included
Siberian Chiffchaff 1 - All the features were correct including particularly black legs.
Chiffchaff (Collybita) - A bit pale and washed out but bare parts not particularly dark and normal calls given after release
Cetti's Warbler - I new bird ringed - they are still moving about (2 singing in the afternoon)
Redpoll 1
There were 4 Tufted duck on the "no swimming" pond
It was a day for birds at the extreme of their range. These pictures of a small Dunlin with a short bill below the heliport wall. Taken by Pete. 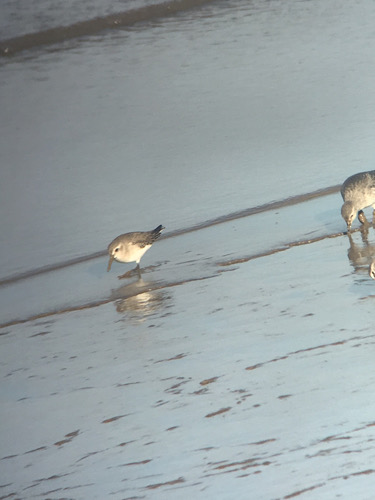 It is unusual for what appears to be a schinzii to be still
around early winter unless it is a very small nominate alpina
Also from the Heliport, Jean managed to read this orange flagged Knot.
Other records from Jean:
Middleton Nature Reserve
Tree Sparrow 5 in bushes then headed ENE, in a line towards the new feeder.
Skylark 1 east
Heysham Nature Reserve

Woodcock - one below the non-existent obs tower.

Plus geese included in report below