100+ terns including Black and Arctic

The wind was much lighter today, but still mainly ENE. High cloud with some sunshine and very light afternoon showers.

Common Scoter 79 in, 71 out but given their locations and timings probably different birds

Shelduck 6 on the water

The forecast for this morning with clear sky and NE breeze did not promise any migrants.  However, after a week of poor conditions and blustery winds we were keen to get out and set some nets.

The catch was much as expected, that is very low numbers, but rescued by two groups of four and three Lesser Redpolls.

I had a walk around mid morning (MD)

Mute 2 pairs, no sign of the Tim Butler pond bird.

Swallow 9, minimal overlap if any with Alan's.

As Alan said, there were plenty of warblers on territory. The following heard singing:

What Alan didn't say was that it was cold! Only two butterflies seen, a Small Tortoiseshell and this Green-veined White.
Heysham skear - low water 14:45
Eider c80 close in
Red-breasted Merganser 6
Little Egret 3
Swallow 2
Waders:
Oystercatcher c2,000
Curlew 1
Whimbrel 8
Redshank c10
Turnstone c100
Dunlin c120
The light was better for seeing the Dunlin today, but their current plumage (half way to summer plumage) is a perfect match for the skear. They trust their camouflage and just move out of your way as you walk by.
Sandwich Tern just two of this morning's passage remained. They had been preening, but the tide had turned and they were getting ready to go off to feed.
Just a quick evening check from the north wall located
Shag 1 2nd calendar year
Sandwich Tern 1
Swallow 2
Just out of the recording area - Heysham Moss Nature Reserve
Yesterday's fire was very destructive. This shot from Janet is just some of the devastation. 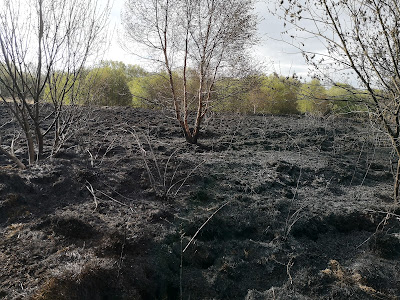 Reuben had to call the fire brigade again as some areas were still smouldering down into the peat, and could easily have flared up again. As Reuben said, all a bit depressing!
On a brighter note Janet managed to spot 4 Roe Deer in an area not affected by the fire.
Posted by Pete Marsh at 21:16 No comments: