The south wind freshened, but the rain was generally light in the morning and had dried up by the afternoon.

South shore
A couple of nice pictures and comments from Kevin

Middleton Nature Reserve (JP)
North shore - low water 15:20
Rock Pipits 1 on Half Moon Bay beach plus 2 below Heysham Head
Wigeon - just distant heads bobbing up and down, but there were lots of them - minimum 50
Great Crested grebe - again hard to count in the choppy sea, but at least 5 close in
Pale-bellied Brent goose 6 - ref Tom Wilmer
This is the area on Moneyclose Lane just before the caravan park. It regularly floods here and has obviously degraded the material forming the white markings. If you look at the bottom right white dash you can see a boot footprint. A large bird has similarly left its tracks along the middle. 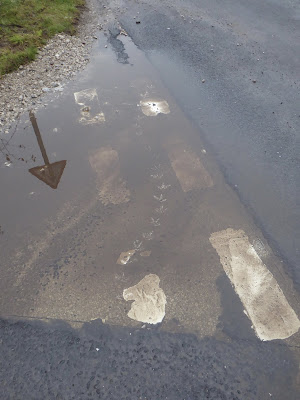 At first I was stumped as to what could have walked so precisely, one foot in front of the other, to leave such tracks. Then I realised, only one foot (right?) had stood on the white, therefore leaving just half of its tracks. Looks like a pheasant. I don't know if the nature of the pigment (I know it includes tiny glass beads) only allows it to be seen in water, but there are no tracks before or beyond this pool. (MD)
Posted by Pete Marsh at 20:02 No comments: