Lots of Snipe, including Jack

WSW to west wind, mainly overcast all day with occasional showers, mainly in morning.
Howard had a look at the Heliport Wall. Fortunately, today there were c2,000 Knot with the Oystercatchers. Unfortunately, today's tide was not high/rough enough to push them to the top of the wall where the ringed ones can be seen and hopefully read.
South Shore (MD)
Wigeon c150 on Red Nab, later c80 went to the saltmarsh and the rest towards Potts Corner.
Greenfinch 2 on Red Nab plus 34 around the saltmarsh
Rock Pipit 4. One on Red Nab, two together on sea wall followed by a third when they flew into the Power Station
Guillemot 1 in harbour near the waterfall 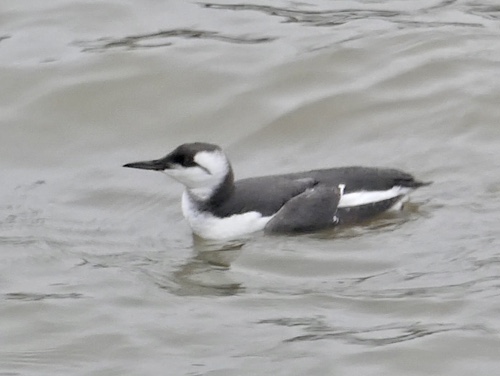 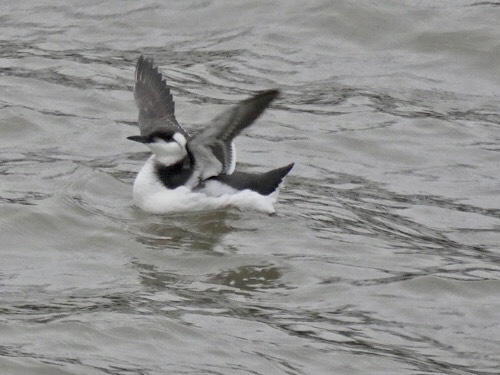 It wasn't feeding, but looked in good health, so I presume it had just finished feeding, as it did have a vigorous bath.
Today's tide was 9m, not quite high enough to cover the saltmarsh completely. But high enough to flush the Common snipe which invariably feed near the middle and outer edges of the marsh.
Common Snipe 38
Jack Snipe 2 - these were a bonus as they tend to move out to the inner edges of the marsh, as the spring tides develop. These two were flushed from the middle of the marsh, but landed back on the marsh nearer the inner edge.
Tomorrow's tide looks promising, unfortunately I'm elsewhere.
Middleton Nature Reserve
Just a quick check of the two main ponds found the wildfowl to be as yesterday, including the male Tufted duck. I was pleased about that, as I'd saved this clip from yesterday (I wasn't sure if I'd have time for a walk this morning). Tufted duck, looking bored with the Gadwall:
Heysham skear - low water 16:50
Just a very brief check in the fading light at 15:30
No Brent geese
Red-breasted Merganser 6, at least, feeding together
No Great Crested Grebe seen, but almost certainly present
Eider c50 close in
Common Scoter 1 juvenile, also close in
Knot c1,500
Posted by Pete Marsh at 20:35 No comments: