Heysham obs
A bit slow first thing in the almost, but not quite, first light frost. Then things got going and produced some interesting sightings, none more so that that very tricky Heysham Patchwork species, Goosander. The White-winged Black Tern reappeared mid morning and subsequently on and off into the afternoon and just prior to that a large sandyish falcon with 'pale around the head' was chased east by one of the local peregrines - seemingly a saker or similar crossbreed.  Ringing at the Heysham NR was predictably slow but Middleton was surprisingly good for a clear morning with a huge reddish moon!

Thanks to Colin Davies for two more pics from yesterday 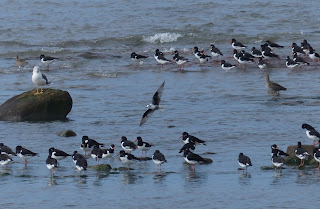 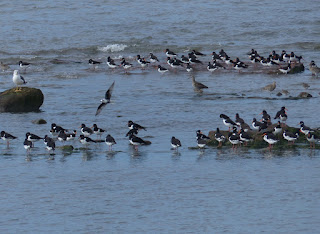 Coastal
White-winged Black Tern - appeared about 0950 and showed on and off until at least 1330 at least including roosting on the wooden jetty and feeding on Heysham 2 outfall
Saker-type falcon - not as far as we know one of the gull-scaring birds from the Power Station - flew SE prompted by a bit of noisy aggro with the local Peregrine.  A "large sandy bird with a pale head"
Goosander - two female types on the sea at the southern end of Ocean Edge
Little Gull - usual adult seen
Med Gull - 12 Red Nab

Butterflies
A really good number around included a single worn Wall Brown by the slipway on Ocean Edge and at least 27 Red Admiral south - also a suggestion that Small Tortoiseshell were on the move with 2-3 flying past the outfalls along the seawall.  Worn Common Blue by the office
Posted by Pete Marsh at 10:29 No comments: