A better than expected sea-watch from Heysham North Harbour Wall this morning (0630 - 0940 hrs) (Peter Crooks) with not a lot seen after then by the follow-up observers!

Coastal/offshore
Arctic Skua - 1 dark morph flew in at 0810 and landed on the sea before continuing into the bay 5 minutes later.
Common Scoter - mid-distance groups of 4, 3 and 7 were completely overshadowed by flocks of c.250, c.70, and finally c.1000 swirling about on the horizon and landing on the sea at very long range.
Gannet - 81, including 32 in a single scan across the Bay
Kittiwake - 3, then flocks of c.60 and c.85 suddenly appearing at mid-range (descending from higher?), then forming tight 'kettles' and gaining height, but seeming not to fly further into the Bay.   Later 40 similarly
Guillemot - 1 in
Sanderling - groups of 4 and 7 flew out, then 9 flew in/across the Bay
Fulmar - 2
Red-throated Diver - 1
Sandwich Tern - 6
Light-bellied Brent Goose - 2 Red Nab/OE saltmarsh
Dark-bellied Brent Goose - one with above 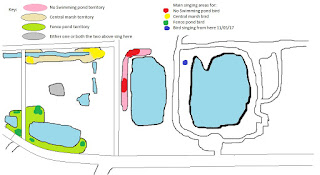 WEBs "nightmare"
1,500 Dunlin decided that they would leave the incoming tideline and fly on to Red Nab where they unfortunately met a repeat performance from the "B and B": 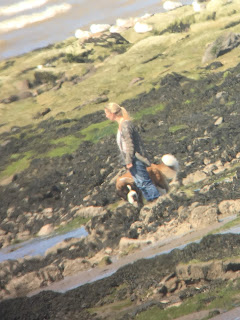 They then tried to land but then veered off over the Bay and seemed to 'climb'.  Looking at the Lune counts they were quite low for the WeBS today - I had far more on the Sunderland mudflats this early am and presumably these were some of the same birds?  Problems with WeBs counts at migration time - these birds could just not be registered as anything as they had gone well before high tide

If any of the Ocean Edge people are reading this, please could you have a bit of a blitz on tides and quicksand -  a couple of girls and a dog from the site were actually jumping up and down miles out near the old sewage pipe and one of them had difficulty extracting one of her legs from the mud and they only just missed being cut off by the channel which runs alongside the seaward side of the saltmarsh .  This channel has deepened and become more "obvious" further out to at least the old sewage pipe over the last few months and is clearly a serious potential hazard, including quicksand.  Need to be off the shore two hours before high tide if you intend to cross this channel on your way back and not face a lengthy detour via eg the beach by the old Pontins site.  See how quickly the recent car has disappeared.
Posted by Pete Marsh at 20:57 No comments: