Red-veined Darter - 4 male on main pond. This one has either come a long way, or been here a long while, or both! 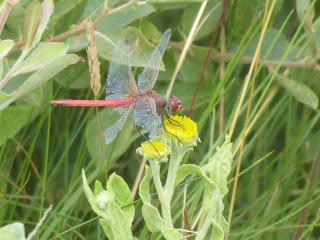 Gadwall c20 adult, or almost adult size birds on "no swimming" pond
Posted by Pete Marsh at 21:29 No comments:

Red- Veined Darter - still one on dog walk pond (this is the small pond on the walk between Red Nab and the Reserve).
Posted by Pete Marsh at 21:22 No comments:

Mediterranean gulls - good numbers on Red Nab early in rising tide, including two ringed birds read by Pete Crooks.  Later in the tide, about 40 scattered around along the still exposed mud south of Ocean Edge but no compact gull roost due to dog
Little Gull - ad summer
Sandwich Tern - 2
Whimbrel - at least 4


Picture below showing some of yesterday's Painted Lady "topping up" after coming in off sea near lighthouse. There were c20 on this knapweed. I can find 16 in this frame. 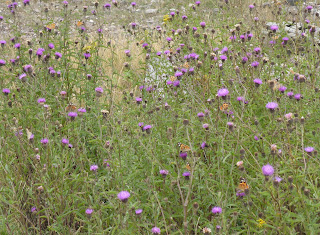