This character has been mentioned before and his clearance of a roost of over 4000 waders today involved some deliberate driving, accompanied by two greyhounds, straight at a splinter group of 250 which had the temerity to land again, .  Along with the pony and trap, an effective bird scarer but why?  What is the agenda of the people who control the access at Potts Corner and obviously know these people?  Soon after this picture was taken the vehicle turned round and it & dogs flushed the remaining waders which flew towards Pilling 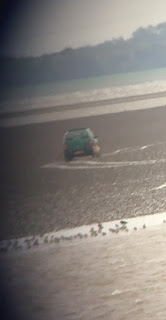 First of all a nice sighting of one of our Grey Wagtails at Carsington Water, Derbyshire, at the end of August.  This was deemed to be passing through and, as such was a case of an adult (female) on the move (ringed autumn 2014)

Secondly all sorts of bits from today which are not in my own notebook, mainly on the small arrival of Goldcrest and Chiffchaff theme

The key sightings were probably two Nuthatch on Heysham Head along with a flushed Tawny Owl.  The latter was known to be there but certainly not Nuthatch, despite the habitat looking great.  One downer though is a plague of Grey Squirrel