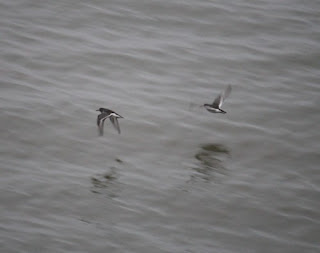 Two Purple Sandpipers along the north wall. Thanks Pete
Heysham Obs
Bits and bobs today included a heaving great mass of waders to the south of Ocean Edge totalling about 27,000, mainly Knot but significant numbers of Bar-tailed Godwit, Dunlin and Grey Plover.  If you are a Leighton Moss Starling roost fan, you'll like this little lot.

Insects
A geriatric worker social wasp was a surprise at the Near Naze
Posted by Pete Marsh at 18:18 No comments: