Good variety on the sea 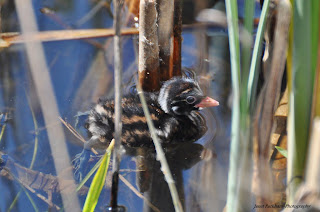 This early Little Grebe chick was photographed last Friday on the reedbed pond at Middleton.  Thanks Janet

Office area
20 mins of vis/assessing grounded stuff 0600-0620 by the office saw just 4 Siskin, 3 Meadow Pipit,  but no evidence of the (localised) easterly producing the goods night-migrant-wise with no obvious corridor from the south overnight

Ocean Edge area
Pale-bellied Brents - two flew along the tideline towards the Lune as viewed from Ocean Edge 0920 - may have come off Red Nab.
Loads of large gulls on Heysham 2 outfall again but nothing coffee-coloured - did include 2CY Med Gull