It, at least, tried to be a decent day!

Very heavy rain started c05:00 and continued to mid morning. After that just a few showers with sunny spells. The wind mainly WSW and quite fresh.
I only had time for an afternoon stroll around the inner skear (the only part of the skear exposed on these neap tides) this afternoon (MD). It felt like something was going to happen......and it almost did!
There was plenty of stuff heading south, but I only managed relatively common stuff.
A distant flock of 10 large "white" birds turned out to be Shelduck.
There were several low flying lines of small "white" looking waders. I think the whiteness was just an effect of the, then bright, sun, and size is difficult at range. Probably Knot or Dunlin.
This flock of 13 birds arriving quickly from the north initially looked promising.......
.......only to turn out to be Wigeon. Nevertheless, they are not seen regularly on the north side.
At 13:30 something lifted all the waders and gulls that had been just south of the Stone Jetty, I searched the skies, but couldn't see anything, but I was expecting it to come south towards me. But everything settled down, and the gulls and waders near the skear didn't react. So whatever spooked the birds near the jetty must have flown east overland. This is just a sense of the commotion when everything is lifted.
There were more Knot around than of late at least 50. Watch the bird on the right, it is teasing out small seed mussels and swallowing them whole. All of today's Knot were feeding this way.
Other waders included, Oystercatcher, Redshank, Turnstone, Curlew and 1 Dunlin.
Mediterranean gull 1 adult
Great Crested Grebe 1
Red-breasted Merganser 2 (1 male)
Kevin sent this nice shot of a regular juvenile Sparrowhawk in his garden, within the recording area. 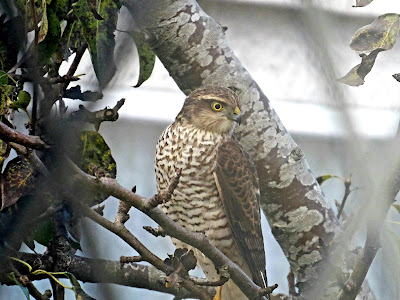 My garden Sparrowhawk is getting wise. It has worked out that it can hide in the rose bush next to my feeders. Luckily for the visitors it regularly gets disturbed by passers-by.