Sea 0615-0930
Arctic Tern - 200 counting Nick's latest 80 (one gang of 40 high inland over Heysham Head just prior to the first DM Arctic S doing the same)
Black Tern - one on its own close inshore heading in
Common Scoter - 80ish mainly going out
Manx Shearwater - unusually tight flock of six in (IOY)
Kittiwake - high flock of 6 adults in
Arctic Skua - one DM high NE over Heysham Head 0625, one int/DM in 0750
Sandwich Tern - counting distant birds well over 60 blogging, gradually reducing as the morning went on
Swallow - c40 in
Sand Martin - 2 in 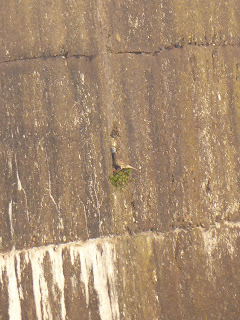 Guillemot - still in harbour near waterfall, often sitting on structures (has been reported as a 'penguin'!!)
Posted by Pete Marsh at 09:31 No comments: