Reasonably mild overnight, the west wind continues, rain threatened all day but didn't materialise
First, a belated record from yesterday:
Red-Throated Diver - 1 juvenile quite close in on the sea out from the north harbour sea wall.
Today's title refers to a sighting of one of the colour ringed Grey Wagtail just three miles from Birmingham City Centre (see scheme detail on side bar to the right)
Ringed on Middleton Nature Reserve autumn 2020 - distance 185km SSE
Heysham skeer- low water 08:30 (MD)
The c1,500 Knot were again flushed from their prime feeding grounds by a juvenile Peregrine falcon. I'm tempted to say that it is a nuisance, but of course it is more than that, life or death depends on it, either the prey or the predator. When the experienced Peregrines feed, a kill is almost always quick, and the remaining Knot quickly return to feeding. Today's bird failed to make a kill but managed to empty the skeer of Knot. Presumably both will go hungry and get weaker until either the Peregrine is too weak to prey or the/a Knot is too weak to escape. The law of numbers favours the Peregrine.
This is it flying round to land after the last of the Knot had gone.
It seems to have given up with the Oystercatcher (see post 19/12/20), one, reluctantly hops away as it lands.
Great Crested Grebe 2
Red-breasted Merganser 2
Eider c60
Wigeon 3 - not common here despite hundreds just to the south of the harbour
Goldeneye 1 male
Finally, as I was leaving the skeer, I thought I would test my theory of the drain feeding the skeer corner being brackish. There has been a lot of rain recently, so plenty of ground water seeping  onto the shore. This picture shows the first pool that feeds the drain to the corner. 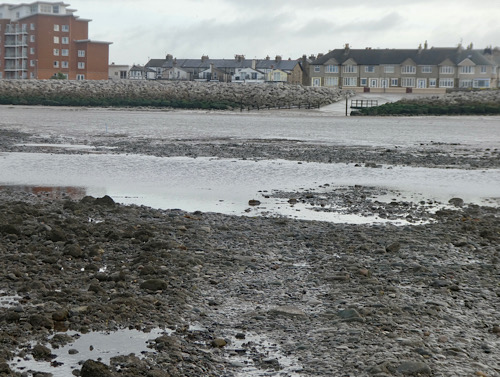 This is c150m from the sea wall. The ground water actually flows under the mud from the shore to this pool. It only surfaces here as the level dips, it then continues just under where I took this shot and resurfaces as flowing water in another 30m. The tide would not have covered this pool for 5 hours, and there is no sea water draining into it, so it should be substantially less salty than sea water. I tasted it, and although, you wouldn't choose to drink it, it was only mildly salty. So, theory substantiated.
The Norwegian yellow flagged Oystercatcher is still feeding on the cricket field.
Posted by Pete Marsh at 20:22 1 comment: