Some wind blown stuff and a visitor from Devon

Early morning sea watch (JR.PM)
Gannet 6
Kittiwake 55
Little gull 1 2nd calendar year bird was disturbed off sea by outgoing ferry, then flew out and relanded.
South shore
Wheatear 2
Rock Pipit 3 (Red Nab, foreshore and sea wall)
Raven 2
The wind had eased from overnight, but it was still very strong. This Wheatear sheltered behind a rock, the wind is coming from the right.
Even the Magpies were struggling!
North shore
Low water channels
Eider 70+
Great Crested grebe 9 in one raft
Red-breasted Merganser 10 (8+2)
Janet took these shots of the Heysham Head Rock Pipits 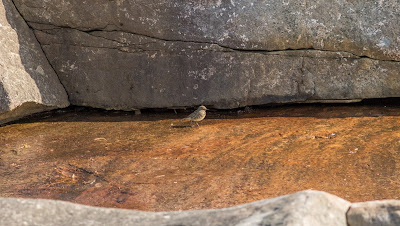 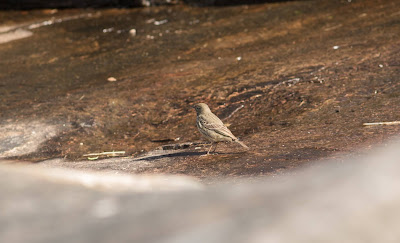 Finally, a bit of good news. I'm pretty sure that this Knot is the one I showed on 21st March, it was very approachable then, but not feeding. I've seen it every time that I have checked the south side since then. Each time it has been more stationary and looking more pathetic. Three days ago it was grabbed by a Carrion Crow and only just managed to escape. I wasn't expecting it to survive. But today, in the area I normally see it, this bird was at least trying to feed, despite being blown back by the wind. It wasn't the only one being blown by the wind, I was too, sorry about the video quality (MD)
I was really pleased to see it looking healthy. I guess it had some avain ailment and was now feeling better. Hopefully it will find enough food to build up its strength.
Posted by Pete Marsh at 20:37 1 comment: