Middleton Nature Reserve
We had a full ringing crew operating this morning. Report from Alan:

The conditions were ideal for ringing this morning and nets were set on both the West and East sides of the road. 50 birds were caught which was a respectable total although given the conditions it might well have been more. Surprisingly, Wrens topped the totals with six caught separately at different times.

A short stroll around heard 9 warbler species, only a Grasshopper missing preventing a 10 out of 10 (MD)
Cetti's, Garden, Lesser Whitethroat, Common Whitethroat, Blackcap, Sedge, Reed, Willow and Chiffchaff.
Other butterflies included Ringlet, Speckled Wood, Small Tortoiseshell and Meadow Brown.
There were three Little Grebe showing well on the main pond. One immature plus two adult, these are additional to the pair on Tim Butler pond.
The immature bird wasn't welcome and was chased off:
In contrast, the two adults were very friendly, or at least one was hoping to be.
South shore - high water 18:20
As mentioned yesterday, these neap tides do not cover the mud out from the saltmarsh. An hour before high water there were 52 Black-headed Gulls out from the saltmarsh plus 326 on Red Nab, just after high water, disturbance on Red Nab had flushed most of the gulls on to the mud, some out from saltmarsh others out from the foreshore.
Mediterranean gull - there were at least two adults with the 326 BHG on Red Nab, both on this clip, but one not really identifiable and the other just a glimpse. That said, sharper eyes than mine could easily spot more. (MD)
This shot is a still from the above clip, it is from the last few seconds. The Med near the bottom only reveals its red beak for a fraction of a second. The other Med is the black head on the left hand edge. 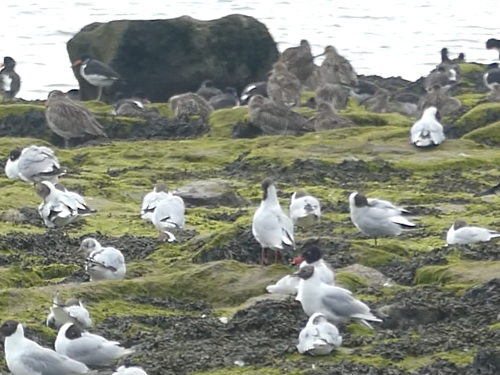 They are both more obvious on this clip, although I have to be honest and say that I hadn't noticed the bird in the bottom right corner, and was just lucky to get it in frame too, albeit only just. The other Med is centre stage.
I didn't attempt to count the Curlew, but there were lots.
Rock Pipits. 4 - Two feeding together on the sloping sea wall, the lighthouse male still displaying. One juvenile bird on the scrub near the lighthouse.
Posted by Pete Marsh at 21:21 No comments: