Another sunny day with hardly a cloud in the sky and a sparkling sea was reminiscent of the Mediterranean provided you didn’t look inland! And the Mediterranean Gulls lounging in small groups on Red Nab were perhaps fooled into thinking they were already in France? Well, probably not and the chilly northwesterly breeze was more likely to make them think about continuing south soon.
Today there were at least 19 Med Gulls including 4 x 2 CY and 3 x 3 CYs and the first juv of the season. 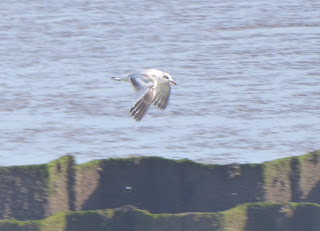 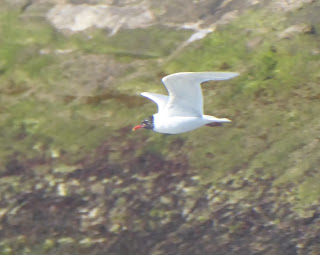 Thanks for the photos, Malcolm.

The Rock Pipits are still feeding young in the nest.

Plenty of young birds on the Reserve, though very few young Greenfinches so far. Young Goldfinches are the most vocal and are going around in gangs. There are spotty Robins and not quite as spotty Dunnocks, yellow-cheeked Great and Blue Tits as you might expect and today several young Chaffinches made an appearance.