The Heysham Obs 2017 report is now (also) available at Leighton Moss.  Ask at the counter.  Ironic that I missed the Heysham Shoveler whilst delivering reports to the main site for Shoveler in this area!

The female Pintail on the model boat pond we can live with missing (autumnal seawatch pull-back?) but lets hope today's late afternoon Shoveler sticks around - very difficult to see here! 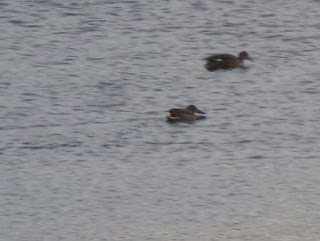 Glaucous Gull - elusive juv seen mid-morning only - lost flying into the low sun towards Red Nab at/near HT.  Is it based on an inshore platform?
Chough - seen once from the Near Naze on the Barrows
Med Gull - adults Red Nab, Knowlys field and a well marked "relict gull" 3CY on Red Nab, later on outfalls
Kittiwake - 2CY outfalls briefly, two adults trailing behind IOM ferry but quite a way behind it
Pale-bellied Brent Goose - two red nab on incoming tide
Shag - harbour mouth briefly mid pm
Oystercatcher - largest roost I've ever seen on heliport surface; possibly as many as 12,000 but very hard to estimate
Shoveler - female model boat pond (but no sign of any Pochard)
Gadwall - 19 the last two days
Ringed Plover - 47 roosting on Knowlys field at HT
Meadow Pipit - three by puddles on Knowlys field HT
Posted by Pete Marsh at 17:47 No comments: