Heysham Obs
Significant Goldcrest passage today with only a limited ringing effort next to the office seeing as many as 36 new birds and one rather unexpected retrap from last autumn.  Up to 6 appeared 'in-off' the foggy sea on the north harbour wall mound, mainly after mid-morning 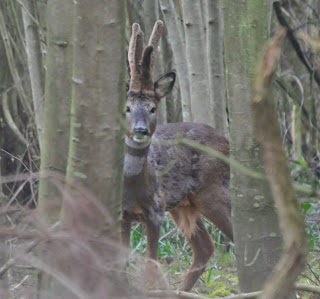 North harbour wall
Twite - odd - c27 early morning included 7 unringed birds out of about 12, then they all seemed to fly off to the SW and there were no further sightings all day
Shag - one
Eider - 110+

Moths
Early Grey, Clouded Drab, Common Quaker, March Moth, Hebrew Character and an agonopterix still to be identified but probably heracliana or an obscure form of arenella
Posted by Pete Marsh at 10:50