Far too calm and sunny

An underwhelming end to the month unless you are into 'Beautiful morning isn't it?' greetings from the punters on Ocean Edge and lots of the likes of Orange Tip butterflies!   Garwa and Grawa serenading from either side of the office was about as good as it got - Garwa are only passage migrants here.  Sea passage much reduced from yesterday and attempts to pick up Ian's north-east-bound-over-the-sea heading your way Hooded Crow ending in abject failure

The ringing totals for April represented a reasonable effort with out any 'big' mornings due to being late arriving on the 18th.  250 birds were ringed; almost all Willow Warbler (107), Chiffchaff (42), Lesser Redpoll (38) and Blackcap (25), next best the last six of the record spring Robin migration early in the month and six Lesser Whitethroat.  Unusual ringing activity for here comprised a Pied Flycatcher on 18th and a very early out of habitat Reed Warbler in the office nets on 19th.

The bad news for moth trappers and the like is that there seem to be a lot of queen social wasps around this year (up to 8 at any one time on my cotoneaster flowers) and the small number of boxes on Heysham NR had three nest starts on the roofs which is unprecedented - also 8 Great Tit, three Blue Tit and a few nest 'starts' 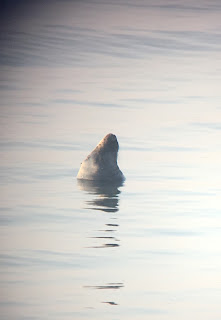