Heysham Obs
When catching and ringing vis mig Grey Wagtails and watching them climb back into the stratosphere heading south-east on release, we did not expect a load of sightings to be 'just down the road' or in two cases this winter, actually staying at Middleton.  Originally we thought the 'local' sightings might have been due to them being early morning ex-roost rather than "genuine" vis mig (sizeable wagtail roost within the power station with  scattering of Greys seen heading there in the evening).  However, the timing of ringing of these 'local' birds did not correlate with early morning ex-roost timing and ringing times were scattered throughout the morning, with no obvious interim loitering spots for ex-roost birds to confuse the timing issue.  So whilst there have been some lengthy movements (especially the quick one to Skokholm), as also suggested by the regular exodus of this species as recorded at e.g. Portland, it is clear that 'vis mig' for some of them might simply be a flight across Morecambe Bay to the first tasty bit of wintering habitat not already occupied.  In this respect, a high proportion of the autumnal birds are on a NW to SE heading with a seemingly concentrated flight-line towards and over the obvious landmark, Heysham Power Stations 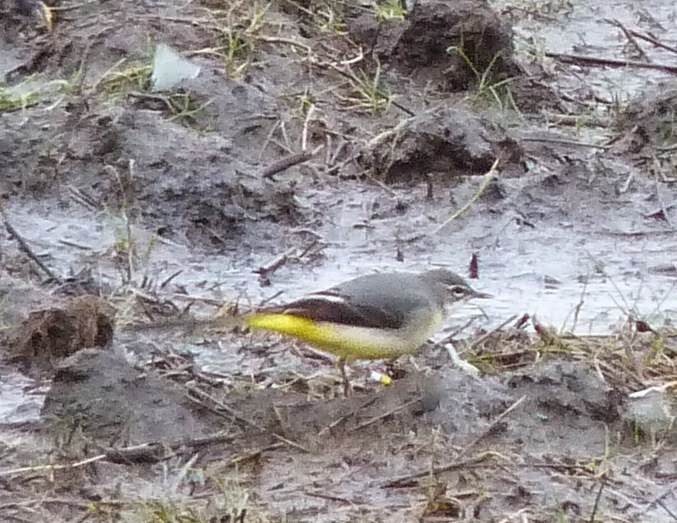 Today's sighting involved a lengthy observation of a settled and seemingly habitual wintering bird (rather than a very early movement) at Warton Bank, north Ribble Shore and involved a bird ringed at Middleton NR as one of the latest of the 2014 passage migrants on 7th October.  Thanks to Ian Walker for documenting this