Bonaparte's Gull - no sign but there was a seemingly smallish adult gull facing into the wind (so no underwing seen) in the melee in Heysham 2 outfall (as viewed from Ocean Edge) about 1240hrs - seen only very briefly with an eye I'm still having problems with.  However a birder on a bike (good move here) was in a far better position to see anything, so no news = presumably a runt BH Gull.  Unfortunately I had to return to the office.
Little Gull - stunning adult summer on Red Nab
Med Gull - 6 x 2CY (at least one green-ringed bird), 4 x adult (at least 2 of them unringed), one x metal-ringed 3CY, 1 x juv
Kittiwake - 1 x 2CY
Dunlin - 2
Redshank - c45

Moths
Rather a lot with the best been a doubling of recent VC60 records of Agonopterix angellicella with 3 in the actinic at Middleton and one in the office toilet.  170 moths in the Middleton actinic including Silky Wainscot and a few Eudonia pallida.  75 species in the toilet trap! 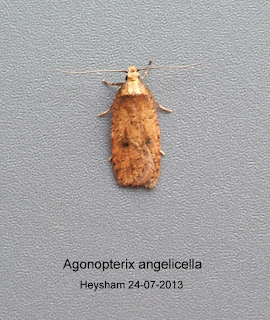