Very strong SW winds all day. Largely dry till late morning then heavy showers.
First the old Heliport. The Knot numbers have increased on this set of spring tides (2,000 yesterday). And Howard is checking them for ringed and flagged birds. Two pictures below one from yesterday and the lower one from today. Remarkable shots, particularly today's in very difficult conditions. 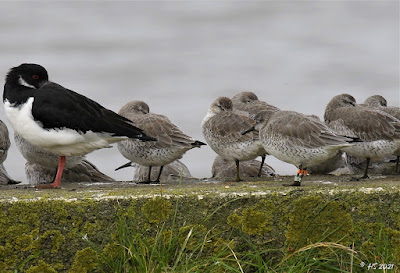 The only other stuff I have so far are from my two walks along the south sea wall (MD).
Late morning:
Wigeon 103, most taking shelter in the saltmarsh area. But this lone bird choosing to tough it out on the open sea.
Greenfinch 12 Red Nab
Rock Pipit 5 (1 on foreshore, 2 Red Nab, 2 between lighthouse and harbour waterfall). This is one of the harbour birds, it had just been "squaring off" with another bird half way between the lighthouse and the waterfall. This is the boundary between two territories, and where Jean caught and ringed a male this spring. It seems to be finding plenty to eat, can't think what, and eventually revealed its ringed right leg.
Jack Snipe 1 - the tide had already covered the saltmarsh on my return. This bird lifted from the water's edge as I walked past.
Mid afternoon - got a soaking on the way out, but at least when it wasn't actually chuckling it down, it was a good drying wind!
Chiffchaff calling from path just behind Red Nab
Pintail 8 to SE at 14:45 - I always think of Pintail as "the masochistic ducks". I only ever see them when they have a strong wind to fly against! Not a great record shot, but it was hard won, so I'm going to use it. They were beating their wings furiously, which can be seen on this shot.
The only other bird of note was this adult Mediterranean gull on the mud, trying to keep its feathers in order, and its feet on the ground.
Pete advises that there is a possibility of sea birds tomorrow, e.g. Kittiwake
Posted by Pete Marsh at 20:43 No comments: