Spotted Flys and bits on the sea

Sea on and off 0815 to 1135
Arctic Skua - At 1125, two dark morphs this am appeared to come high from the south-east before landing on the sea and floating in with the tide. I've seen plenty of skuas circling up and heading north east overland but not seemingly arriving from overland, although this is quite often seen with arctic (and when you get them) black tern flocks
Arctic Tern - flock of 4 in as soon as the tide started coming in
Sandwich Tern - one fishing distantly at low tide, then just two seen - flying purposefully into the bay together so presumably late migrants.  So presumably the hordes are now finally on 'nearer to the nest duty' in SW Cumbria?
Common Scoter - just c40+5 in
Guillemot - 8 floating in quite close
Kittiwake - single adult in
Razorbill - one as above
Whimbrel - 1 in
Swallow - 16 in
House Martin - 1 in
Red-breasted Merganser - two close inshore and pair further out
Great-crested Grebe - 17 counted at low tide - Malcolm (who knows the skeers and tides better than anyone in this area) went to investigate: 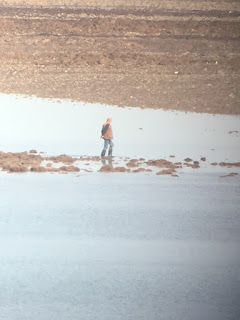 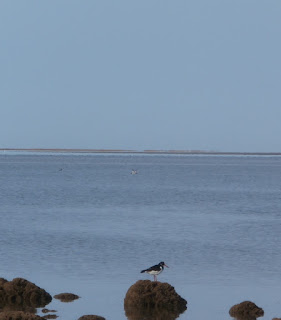 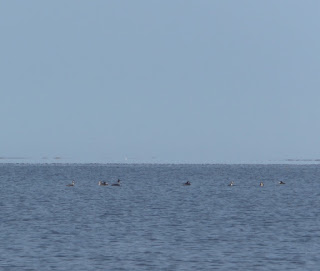 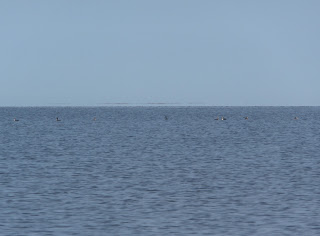 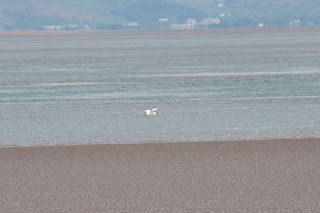 Miscellaneous
Spotted Flycatcher - one on pond fence by HNR office during a loo break prompting a quick Heysham Head check and there was at least one mobile bird in the line of trees between the church and the chapel
Posted by Pete Marsh at 15:12 No comments: