An Old Lady and rodent control

The light breeze started off NE but had drifted to NNE by late morning. An overcast start but sunny for the rest of the day.
Middleton Nature Reserve
Ringing report from Jean:

Lesser Whitethroat 2 (1 was an adult)

Blue Tit - First ringed on 13th May this year at Middleton as a bird born in 2020. So middle aged for a Blue Tit as the average age they live to is 2.7 years, although the oldest recorded was over 21 years old! 2/3 do not survive the first year of life but the odds on surviving longer increase after that.

A Greenshank heard in the distance.

No Mediterranean gulls seen feeding on the beach near the jetty

Common Darter 2 - this male Common Darter appears to be eating at the start of the clip, but I can't see anything, perhaps it was just "working its jaws".

Butterflies - these numbers represent the highest count at any one time

This is the Old Lady, not an uncommon moth, but quite splendid. This one has unfortunately lost a chunk of one wing.
........and this is the rodent control. Janet took these shots of a Fox with a rat in the horse field next to Knowlys Rd. 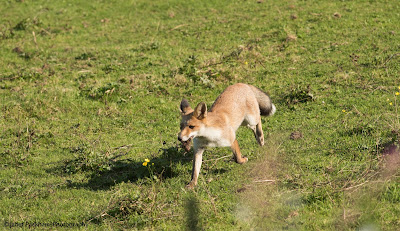 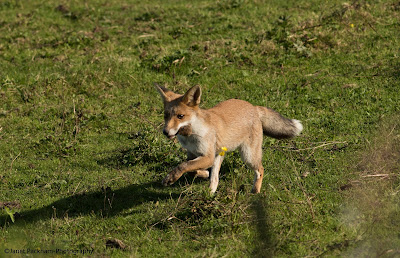