A bit of selection, but nothing exciting

South wind alternating from just east to just west. Long dry spells with some sunshine, but showers in between some quite heavy, luckily easy to see them approaching from the south side.
South Shore late morning.
No Mediterranean gulls seen today
Wigeon 75
Shelduck 6 south
Pink-Footed goose 79 south 11:45 - a bit early for returning to roost, but they were quite low. 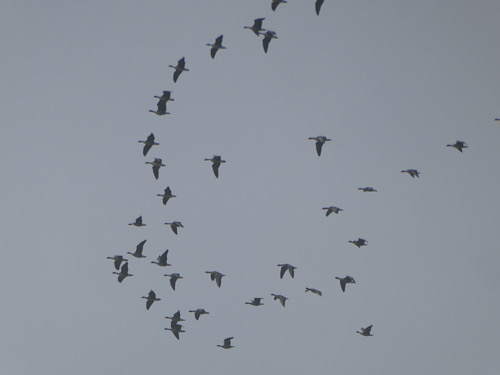 Common Snipe 8 on saltmarsh
Linnet none seen again, it is almost a week since the last sighting here, the Samphire must be exhausted (as in run out, not worn out!).
Greenfinch 3 seen on saltmarsh, foreshore and Red Nab, possibly all same birds, but suspect at least two lots.
Rock Pipits minimum 4, probably 5, possibly 6 - 2 on foreshore, 1 on Red Nab, 1 near waterfall and 1 near No.1 outflow possibly same bird, another on sea wall near No.2 outflow may have been additional.
Cormorant - there were three feeding at the waterfall, three more at the bottom of the upstand, with at least one looking like it had already fed. Three more at the top of the upstand, looking like they were waiting their turn.
Peregrine Falcon 2 hanging on the updraft above the Power Station
The sun brought the Common Darters out, I counted 8 between the Nature Park pond and the small anemometer. I think the latest record we have here is 18/11, so they have to hang on for another 3 weeks!
Heysham Nature Reserve
I just did a 20 minute circuit at 16:00 (MD).
Didn't manage to locate the Green Woodpecker, but there was plenty going on, including
Sparrowhawk hunting
Goldcrest at least 1
Bullfinch 5 - this morning, I was talking with Kevin about symbiosis in nature, but Bullfinch don't seem to have read the script. Earlier in the year I showed them feeding on unopened Blackthorn flower buds. Today they were feeding on Hawthorn berries. Hawthorn berries have evolved so that the birds eat the fruit, then later deposit the seeds in a potentially new habitat, with a nice dollop of fertiliser. But the Bullfinch were removing the seed from the fruit and just eating the seed, presumably they can digest the seeds, perhaps some get through unscathed.
Posted by Pete Marsh at 20:41 No comments: