Heysham one outfall soup kitchen pulls in the terns 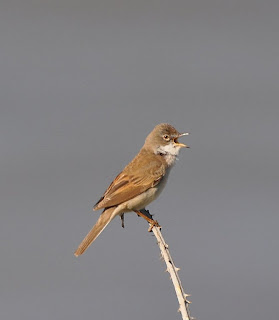 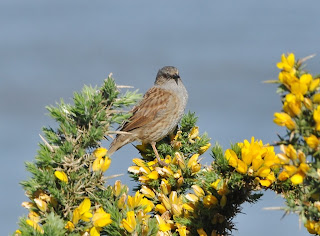 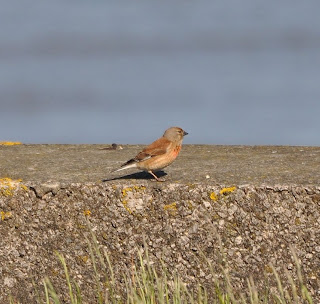 Plenty of singing birds today (thank Janet)
Heysham Obs
Everyone's 'eggs were in the seawatching basket' this morning, when the much reduced wind did not get up as anticipated until after 0800hrs and landbird coverage might have been a better option for some of us, plus early morning mist nets.  Even more difficult than yesterday to count the terns and the figure of c500 could have been an underestimate by at least 200, based on perceived numbers on the outfalls which 'melted away' instead of flying north-east over the sea.  In this respect, one gang of 17 Arctic Terns flew inland over Ocean Edge during a brief visit; no chance of logging these from the north harbour wall

North harbour wall 0615 onwards
Arctic Tern - c500 during the morning stint with many flying inland and overland to the south of the harbour, therefore very difficult to keep tabs, especially as many were lingering on Heysham One outfalls which seemed to be churning out a lot of invertebrate soup! A further influx early afternoon involving about 200 birds and 110 were still on the outfalls when observers left mid-afternoon
Marsh Harrier - ad male-'type' (in the absence of close views and feather scrutiny) flew rather laboriously low over the sea NE at 0706hrs (just east of Clarke's wharf sandbank)
Med Gull - 2CY with 'blackish' head - surprisingly the first for a few days - didnt linger
Black Tern - one lingering on the outfalls and area for at least 2 hours and almost certainly another with a further influx of Arctic terns early afternoon
Common Tern - one-two Heysham one outfall
Common Scoter - 8+16 distantly
Gannet - one on/over horizon!
Whinchat - male by centrica
Swallow - c50 NE
House Martin - 1 NE
Sandwich Tern - just one offshore and 2-3 on a buoy
Greenfinch - one overhead was rather unexpected this late
Red-throated Diver - one in
Willow Warbler - one singing by Gate 38 in SD35Z!