Not a lot of Meds, but enough to go round.

Another steady west breeze all day, some light showers but largely sunny.

A group of 14 LDBWS members enjoyed searching for Mediterranean Gulls at Heysham on the incoming tide this morning. Highlights in roughly chronological order:

Assuming some duplication of Med Gulls at the different locations there were a minimum of 13 different individuals – 6 adults, 2 3rd CY, 1 2nd CY and 4 juveniles.

In addition
Dave Hawkins had another two Kittiwakes at the back of the harbour, 1 adult + 1 juvenile
Pete Marsh remained near Red Nab:
Sand Martin 1, in-off at red nab
Manx Shearwater 1, very distant in against the turbines
7 non-juv Mediterranean gulls flew south past OE very early on (before 1030). Also 6 juvenile seen.
Before the LDBWS group arrived I (MD) had
Rock Pipits 3 on foreshore
Wheatear 5 - 2 on foreshore 3 on saltmarsh
A check of the Buddleia near the newt pond at 11:00 found it full of butterflies again, including:
Comma 1
Red Admiral 3
Painted Lady 4
Large White 3
Plus, Common Blue, Gatekeeper and Meadow Brown
These are two of the Red Admiral, both quite faded.
These Whitethroat were near the small anemometer, I initially thought Common, but Pete Crooks, advised Lesser. There is a female feeding at least two young, although the "young" look more than capable of feeding themselves.
It was a big meal, but fed in two servings. These are a couple of stills from the clip, but I still can't decide what the meal was. 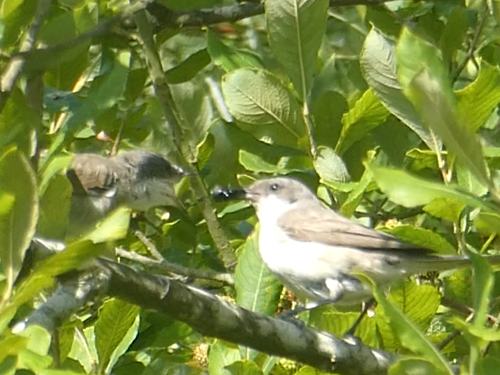 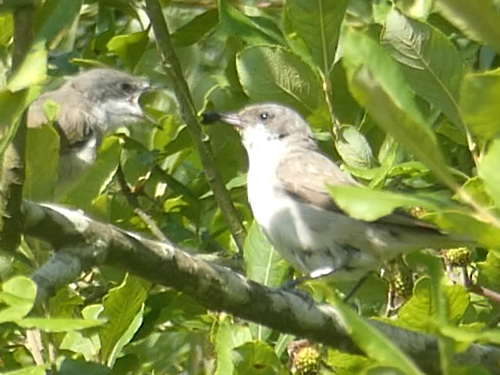 Pete (M) also reported two Common Whitethroat in the Heliport scrub plus two Willow warbler in garden near horse paddocks. There was also a Willow warbler in scrub near the lighthouse.
Middleton Nature Reserve late afternoon
Mute Swan pair plus 9 cygnets, just one adult seen on the Tim Butler pond, but large areas are hidden from view.
Mallard 7
Gadwall 1 female with 3 young
Coot 3
Moorhen 9
Swallows 44 to SW. they started moving through at 16:00 and were still moving at 17:00. Biggest group were 12 that had been feeding over the central marsh before moving off, the remainder were in ones and twos.
Dragonflies - not a lot:
Emperor 2
Brown Hawker 1
Black-Tailed Skimmer 2
Common Darter 6
Butterflies - also unspectacular:
Peacock 1
Meadow Brown 3
Gatekeeper still abundant
Common Blue, less so
Speckled Wood several but becoming faded
Large White 2
Small White 4 confirmed
Green-Veined White also 4 confirmed, all looking very warn
Several other "small white" butterflies could have been either species.
Finally, in the spring (it feels like last week!), based on the blossom, I speculated that we should have a good crop of hawthorn berries to hold onto the winter Thrushes this year. The fruits are just beginning to ripen and it looks like a bumper crop.
Posted by Pete Marsh at 20:49 No comments: