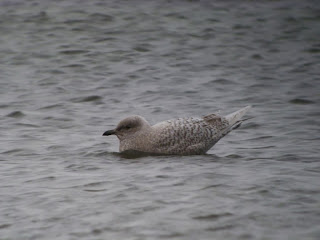 A fine portrait of the Iceland Gull by Gavin Thomas

Gavin and Ian watched the Iceland Gull until dusk as it returned to Ocean Edge and then the harbour area. Also 5 adult Med Gulls, including 2P96

The Iceland Gull once again enjoyed much of its time today on the model boat pond at Middleton until 14.10 at least.
Also there:
11 Mute Swans (4Ad/7juv)
6 Gadwall
12 Tufted Duck
2 Pochard
3 Little Egret