Apart from five new Grey Wagtails and three Meadow Pipits the only other captures this morning were singles of Wren, Robin, Blackcap and Chiffchaff. A retrap Cetti's Warbler and a Robin were also caught.

Very little was seen in the sky - a single swallow and Meadow Pipits only just into double figures. Six Grey Wagtails escaped capture.

A flock of 10 Linnet had gathered.

Little Egret 6 on the skeer

South shore
This is what today's title refers to. Janet took this excellent sequence of a male Grey Seal dozing in the harbour mouth. 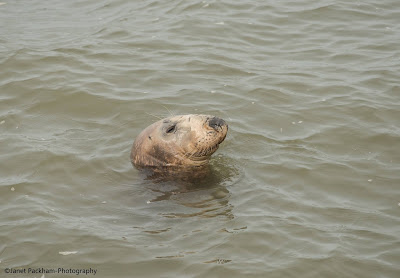 No Wheatears today
Meadow Pipit 3 south
Rock Pipit at least four around Red Nad area. This short clip shows four feeding on their favoured spot, the tide line between Red Nab and Ocean Edge foreshore.
Mediterranean gulls Pete had a quick check early in the tide, the long staying German ringed adult was on the mud.
Two adult plus three first calendar year were on Red Nab rocks at high water, making for easy viewing. You don't need to be a gull expert to recognise the "juvenile" behaviour!
This next bit is also from Red Nab at high water, but it was from yesterday (I forgot to post it yesterday, but may be of interest if we get more warm sunny days(MD)).
There hasn't been much rain since the the last spring tides, so the water would still be quite saline. But that hasn't stopped it being occupied by dragonflies, yesterday there was one Migrant Hawker and at least four Common Darter on this pool, including this pair ovipositoring.
Back to today
Linnet 19 on saltmarsh
Skylark 1 grounded near slipway.
Posted by Pete Marsh at 22:23 No comments: