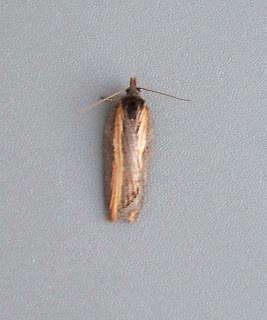 Heysham Obs
This was not a '3 Purp sands & 30ish Twite with half a dozen unringed' day, as many have been of late.

No ornithological coverage apart from:

Twite & Linnet
A Twite ringing session carried out by Alan did not go as planned! The flock of 30 ish of the last few days was not there as a unit. Instead smaller groups passed through and there was a record 6 firings of the 'whoosh' net which resulted in 11 unringed and 7 ringed birds, four of which had not troubled the scorers since autumn 2008! Quite a turn-round and obviously a sign that passage is underway.
Six Linnet were also ringed
Sparrowhawk - two birds "hanging around" the north harbour for a short while could have been migrants attracted by the presence of Linnet & Twite

Moths
Two obscure darkish Acleris-types on the last two mornings were thought to have been one of the ferrugana/notana pairing. However, hastiana was also mentioned as a possibility and g.d. indicated that one of them was indeed a more obscurely marked specimen of hastiana. The other was presumably the same but could not be definitely identified from the picture. There have been other records at Leighton Moss this week. This morning produced a strikingly obvious form of Acleris hastiana (see picture). This moth appears to be a 'well-distributed generalist' as regards national status (e.g. UK Moths website) but has been very scarce in VC60 this millenium (4 records prior to this year), following a flurry in the 1990s. It is a new species for Heysham/SD45. Early Grey, never common here, was also new for the year this morning

Elsewhere
Great Grey Shrike was cooperative for several observers today in the trig point area of Dalton Crag. Pair of Mediterranean Gull in the Willow Lane area of Lancaster comprised a metal ringed and red darvic-ringed bird. Please try and read these if you get a chance. Plenty of Sand Martin including 70ish at Pine lake. Avocet reach 10 at the EM Pool.
Posted by Pete Marsh at 21:58 No comments: