Heysham Obs
The sort of weather which can produce Great Shearwaters trailing past Blanan on Cape Clear (and three days of drying out your scope), but hardly the top recipe for Morecambe Bay.  Should have had a seawatch last night whilst the wind was strong!

North harbour wall 1100 onwards
Kittiwake - 5 adults behind IOM ferry, then blogging around harbour mouth, then flew out
Wheatear - one
tern spp - one distantly

Moths
A Lesser Swallow Prominent, very scarce here, mysteriously appeared on the wall after the main catch had been checked - this does happen here with plenty of nooks and crannies 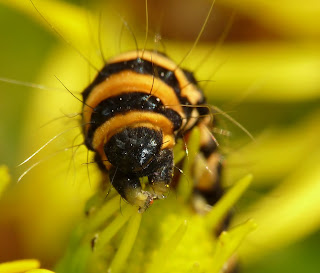 Cinnabar caterpillar, thanks Janet
Posted by Pete Marsh at 11:32 No comments: