Shag, or a shag, still around

Very heavy overnight rain and hail showers. The wind not as fresh as yesterday veered from SSE to SSW by afternoon. Overcast all day with rain showers increasing in frequency and length as the day progressed.
Heysham skear - low water 10:30
Great Crested Grebe 2
Red-breasted Merganser 9 (2, 3 and 4)
Goose sp (almost certainly Pink-Footed) 21 and 24 south
Eider 5 male
Little Egret 18
Waders included: Oystercatcher, Curlew, Redshank, Turnstone, Dunlin (just 2) and Knot 60 (in one flock that seemed to move on)
Shag 1 feeding in same location as Sunday, to the NW of the skear. But today's tide did not expose as much of the skear so I was further away and the light rain made it more difficult. I couldn't even tell if it was a juvenile, but it likely was (MD).
Cormorant, rarely get a mention but they are always fishing around the skear, probably 10 today.
These low neap tides do not even completely expose Conger [rock]. But it makes it a favoured resting point. Shag also rest on here occasionally.
This clip shows an adult Cormorant moving off after feeding, followed by a juvenile.
Middleton Nature Reserve
Janet spotted a "white duck" on the main pond, she was confident that it was a domestic duck, but I called in on the way home to have a look. 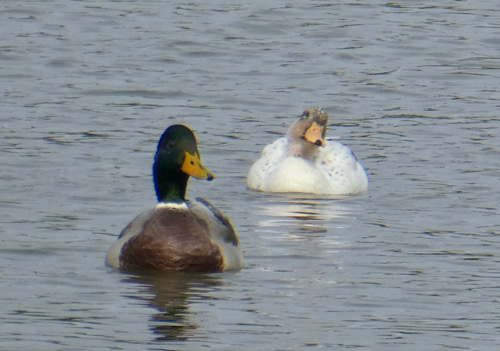 Just the two main ponds checked:
Mute Swan 2 adult 9 cygnets
Mallard 8 including the white bird
Gadwall 17
Teal 3
Presumably the appearance of the "mallard" was related to last night's very heavy showers, which probably also accounted for some additional corvids. There were 15+ in the corner near Tradebe, only seen from a distance but they all appeared to be Carrion Crow and the resident 5 or 6 birds in that area were not happy!
Posted by Pete Marsh at 22:23 No comments: