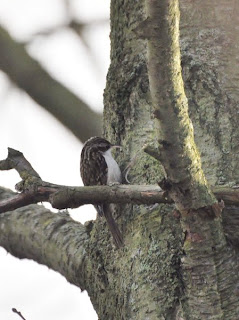 The latest addition to the Heysham year list - 2010 was a good year, perhaps surprisingly after the 2009/10 winter, but history suggests you should never take this species for granted here, although the maturing woodland has seemingly recently given it 'guaranted annual' status.  Thanks Janet
Heysham Obs
15 minutes of repeated scans covering almost 180 degrees, in perfect visibility and at high tide on a 'millpond' produced............not even a seagull.  Then a Red-throated Diver was seen miles out way to the north.  It'll be better after a few days of gales have churned things up this coming weekend.  Much better inshore, but the Twite seem to have disappeared (see below).

Purple Sandpiper - 2 outer section of wooden jetty, presumably one of these earlier on the Near Naze
Med Gull - 2 adults on the railings next to the anglers & presumably the 1CY recorded in autumn 2010 was a surprise package during a bread-feeding session there early afternoon (thanks Pete)
Red-throated Diver - one far offshore

Twite - prolonged disturbance of the usual feeding area on Sunday may have contributed to the lack of birds there since
Posted by Pete Marsh at 15:25 No comments: