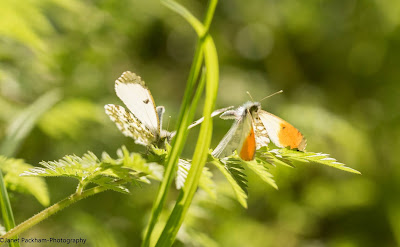 Heysham Head foreshore - high water 12:00
I went down at high water, hoping to better understand the Rock Pipit situation, I am little wiser! (MD)
Wheatear 3
Rock pipits - none seen around the very northern point were a pair/displaying male have been active until today.
There were three birds below the high cliffs. They seemed to be comprised of a male standing guard whenever I went too close to his territory. Plus two feeding birds, one tolerated by the male the other chased away if it got too close. Unfortunately, I didn't see any bird carrying food in its bill, although both feeding birds did occasionally fly high over the cliff tops.
This is a clip of what I believe to be a male. I'm posting this for two reasons, first I like the sound of the waves against the rocks. But, I suppose, more importantly, to show this bird's quite distinctive plumage. It has a high density of spots forming a heart shape on the right side (wrong side for a heart) of its chest. This is a genuine feature not just an effect of the light. I picked it out several times in different lighting conditions.
This next clip, is partly for interest, but also to act as a warning. It shows the torrent of ground water at it emerges from the bottom of a crack in the cliffs. There are several of these cracks along this section. This is not water from the water table, but just rain water draining through the soil above the cliffs. The water is not visible above where it emerges, just the crack, but you can imagine the internal erosion going on.
The significance, of course, is that these cliffs are constantly being weakened. Many have large overhangs, which may remain for years or may drop tomorrow. It is safe, although sometimes slippy, to walk below the cliffs, but don't go too close, and know your tides.
This is the Herring Gull spotted by Gareth and Lesley Powley in Heysham Harbour 30/03/21. We have now received its details, it's done well to be spotted in a range of places, for such a young bird.
Posted by Pete Marsh at 20:31 No comments: