Very strong SW wind all day with plenty of showers.
From Pete:
Ringed Plover 27 on south shore grass, an unusually large winter number here.
Kittiwake 1 first winter out from the wooden jetty
Red-Throated Diver 1 out
Mediterranean gull 1 adult on the horse paddocks (looked to be the lamppost bird)
Little gull 2 (at least) The SW wind was driving in the high spring tide over the sea wall by the children's play area and creating large pools in the horse paddocks. Tommy Wilmer reported a Little gull there, Pete located an adult and let me know, fortunately I had just donned my waterproofs so I went for look.
But Alan Physick beat me to it and managed this shot a Little Gull with a
Sanderling in the background.
By the time I'd got there the tide was ebbing and the pools receding. No sign of the Sanderling but there was a
Rock Pipit 1
There was an adult Little gull flying around, it looked to me (MD), that it was finding worms drowned by the saltwater pools and then exposed as the water levels dropped. If so, it is some opportunism for a dedicated sea bird. This clip is typical of its activity
This shot shows the location, just beyond the wire perimeter fence. Although the birds were close the combination of being buffeted by the wind, the constant sea spray and looking through fencing made focusing very difficult. 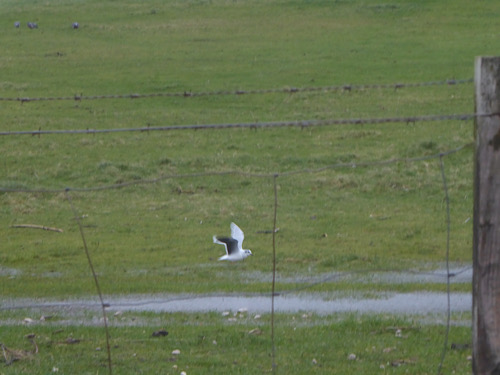 This shot is looking back towards Knowlys Rd 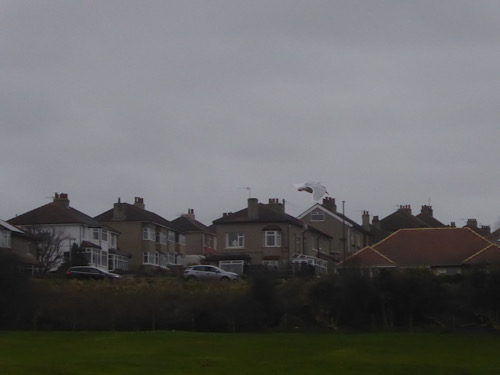 It was only when I'd got home and checked through my pictures, that I could confirm that there were at least two Little Gulls.

Heysham Harbour (MD)
I went down mid morning, couldn't find anything on the sea, but....
Shag 3 juvenile
One on the steps near the lighthouse again, I thought it was struggling as it had its head under its wing, it looked at me when I made a noise, then put its head back under its wing, although it did keep one eye on me.
I left it in peace, but feared the worse. Checking the waterfall from the lighthouse, there were two more juvenile Shag feeding. But perhaps I shouldn't have worried, without any disturbance the steps Shag climbed to the top of the steps then waddled all the way along the harbour wall towards the waterfall. Probably not coincidental, that this coincided with the tide just covering the waterfall outlet, a point in the tide where I suspect the fishing advantage switches from the gulls to the diving birds. This is just a portion of its journey.
But, perhaps worry is still in order. When it had waddled to the waterfall, the kindest description is that it....."fell in"!
At the end of the above clip, I pan out, expecting to pick up its flight. Instead, it landed just in front of the harbour wall.
Posted by Pete Marsh at 21:18 No comments: